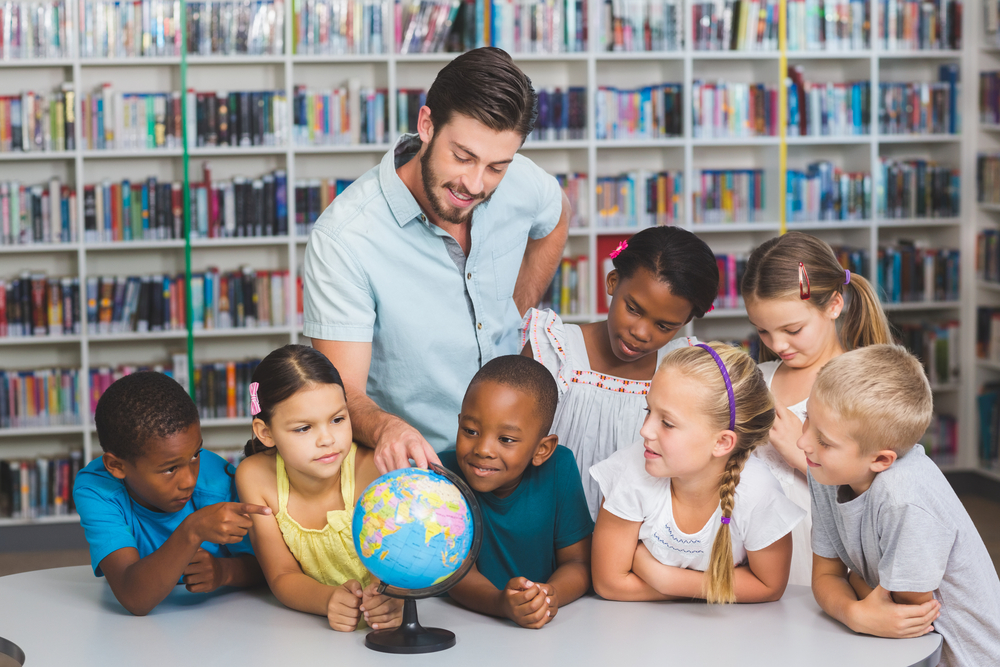 Fall is traditionally a time of anticipation for everyone connected to international education.

New students get to lay eyes on their new schools for the first time, while for returnees, it’s a chance to catch up with old friends before resuming their studies.

New teachers begin to embed themselves in new cultures, while others return to their term-time lives after long summer breaks.
As for recruiters? Well, they get to see all their hard work pay off.

But this fall feels different.

A decrease in face-to-face job vacancies, coupled with the logistical difficulties that students, teachers, and their families still face amidst the global pandemic, has left many schools needing to rethink their recruitment strategies.

But progress is being made.

So, let’s explore how international education is continuing to respond to the pandemic by unpacking the following:

Why many schools are prioritizing domestic hires.

But when the coronavirus hit, many families packed up and headed home on the advice of their governments.

Schools have had a hard time encouraging them back, with the high costs involved, concerns about the dangers posed by air travel, and government restrictions proving difficult to overcome.

The knock-on effect of this is how do you replace staff who are unable to travel or have decided not to return?

The logistical difficulties facing both teachers and students have left a lot of schools with no option but to prioritize the domestic market by focusing on teachers who are already settled in the country.

Taaleem, one of the largest education providers in the UAE, will welcome 127 new teachers this fall as schools across the Emirates prepare to reopen. But all these teachers were recruited before the pandemic, and Taaleem is now focused on local hires only.

If you are looking to recruit new staff, then crucially, our hiring platform allows you to source potential candidates by location, meaning you can hire teachers in specific territories.

Looking forward, there are signs the UAE is beginning to relax its restrictions.

Abu Dhabi based British school, Al Khubairat (BSAK), has managed to gain permission to fly in two international recruits from overseas, both of whom will have arrived by the end of August so that they can self-isolate before term starts.

We’re confident that the number of teachers permitted to travel will slowly increase over the coming weeks.

The continued growth of online recruitment.

The difficulties schools face in predicting both student enrolment and teacher-numbers for the upcoming year has resulted in an upsurge in the use of online recruitment platforms.

The appeal of online platforms is that recruiters can interview potential candidates without having to navigate all the complexities involved in setting up face-to-face meetings or large scale recruitment events.

Online recruitment platforms have lots of benefits, with one distinct advantage being the capacity for both recruiters and teachers to stay in regular contact and adopt a flexible approach to the hiring process.

This is vital because the global pandemic is ever-evolving and both governments and education authorities the world over are having to introduce new policies and change tact at short notice.

With experts predicting that 80 percent of all recruitment will remain online for the foreseeable future, leveraging this lucrative market should be a priority.

Why safety-first remains the key to success.

Keeping schools safe should always be a priority, but right now, it’s more crucial than ever.

The countries that have enjoyed the most success in reopening schools and getting teachers back to work had clear strategies from the beginning.

They employed effective track and trace measures, took affirmative action by closing down during the early stages of the pandemic, and have continued to maintain sensible but practical school policies during reopening.

In Denmark, for instance, schools closed in March before a significant drop in cases allowed them to reopen just one month later.

All schools, including kindergarten’s, adopted the following policies:

It’s interesting to note that although schools in Denmark did not introduce mandatory face masks, the country’s still been successful, with class sizes scheduled to return to normal this academic year.

We think a safety-first approach is vital because overconfidence can lead to disastrous results.

What happened next shows why it’s so important to be vigilant.

In May, an unexpected heatwave forced many schools to close classroom windows, which led to poor ventilation, which in turn led to a surge in virus cases.

Nearly 250 schools went back into lockdown last month, and Israel’s still struggling to control the situation.

Inevitably, many of the countries most disrupted are developing nations that paid the price after easing restrictions to relieve growing economic pressures. In Kenya, for example, the government has now cancelled the remainder of its academic year. It has no plans to reopen any schools or recruit any new staff until January 2021.

What this suggests is that for many countries it isn’t a lack of will that’s posing problems, it’s the urgent need to continue providing for their populations.

Some countries are welcoming back foreign teachers.

The desire to open schools must be balanced by the need to avoid sudden and costly closures. As a result, many countries are understandably taking a cautious approach with overseas recruitment.

But we are starting to see some movement.

Earlier this month, China announced it would allow teachers from specific European countries who’ve been stranded in their home countries to apply for new visas. Teachers will need to meet the criteria, which currently rules out anyone seeking their first positions in China.

The cost of travel makes this prohibitive, but it’s a promising sign for both schools and teachers. The invitation to return is likely to be extended to educators in other regions soon enough.

Other countries have gone further.

At the beginning of August, Thailand announced it would allow foreigners who hold a variety of different permit-types to enter the country. They’ve now updated this to include new teachers as well as those who’d previously taught in Thailand.

The country’s proactive approach has meant that over 3,000 foreign teachers have applied to enter the country.

It’s a risky move, but we’re all hopeful it pays off and paves the way for other countries to adopt similar measures.

One of the dilemmas facing schools with recruitment and repatriating overseas staff is the difficulty in helping teachers prepare the required documentation for future travel.

How can you begin to get documents attested and visas processed when many visa centres around the world are closed or operating on reduced hours?

This is particularly problematic when embassy closures are not only driven by new rules on health and safety but in some cases are a result of increased political tensions too.

Visa protocols often differ from country to country, but this is something that’s been exacerbated during the pandemic because governments are continually having to shift their stance, which means bureaucracy is always playing catch up and it’s harder for schools to give overseas staff sound advice.

The pandemic has left a lot of teachers stranded and unable to travel home due to both the cost and the lack of flights, but new visas are often dependent on individuals being present in their home countries.

Hopefully, governments will begin to relax their visa processes and allow schools to help teachers apply for the documents they need in countries where they are not necessarily resident.

Preparing for overseas travel right now is pretty complicated and it’s vital schools and their foreign staff pay attention to countries that demand negative COVID-19 tests before booking a trip.

The United Arab Emirates and China are two examples of countries that now require proof of negative tests before they’ll let you board a plane. If you are planning to fly, or if you’re assisting others to do so, you should check the policies of different airlines.

There are many challenges facing schools right now. Although it’s impossible to predict when all international teachers will be able to return to the classroom, there are reasons to be optimistic. Several countries are beginning to take tentative steps in allowing some staff to travel, and others are expected to follow suit soon.

How Thailand fares will be of interest to everyone, but in the meantime, the best way to ensure that next fall resembles happier times, is to stick to the science and try to keep schools as safe as possible. 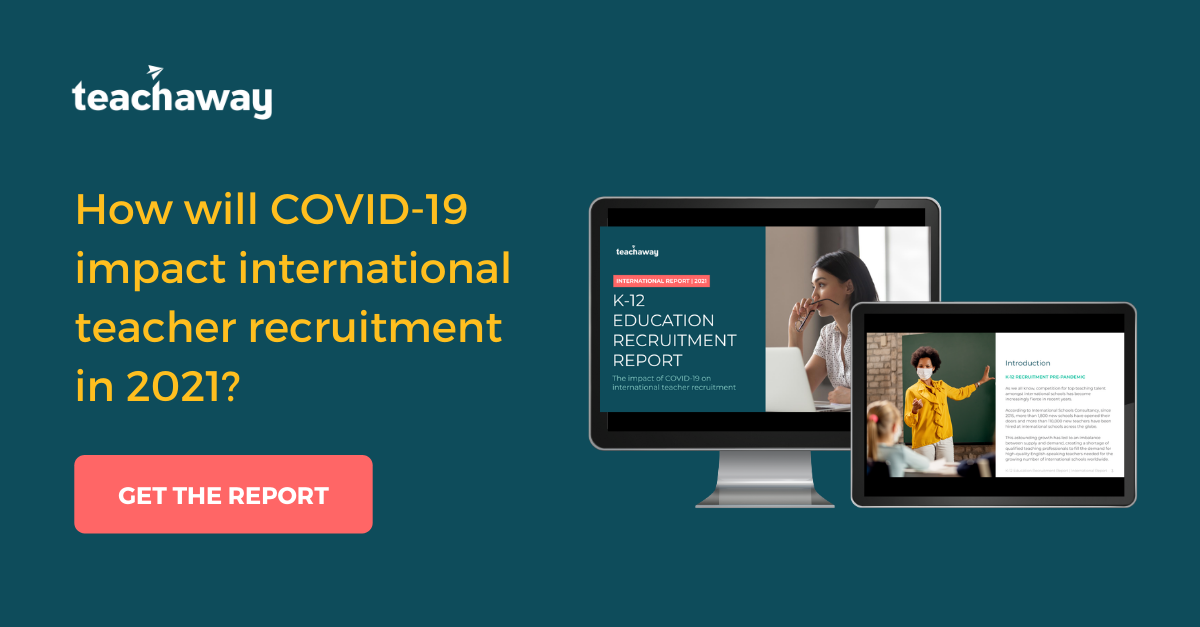 Mitigating risk throughout the recruitment hiring process to avoid vacancies Is your school doing its best to develop and retain teachers? Should you add salary to your teacher job postings?